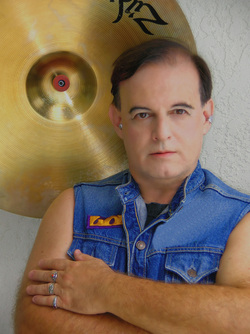 Gregory Galfo  records audio for musicians and indie bands. He produces and/or manages indie music artists, does live sound, mixing, mastering, licenses and publishes music, and is the executive producer for Anvil Records.

During his teen years, he became interested in recording audio and started recording using a "reel to reel" Sony tape recording deck. Soon after that he learned how to do multi track recording using a simple 4 channel mixer. Over the decades he progressed with technology into the digital age but still uses some analog recording methods as well.

Galfo picked up the acoustic guitar at the age of 17 studying under his mentor (and roommate), guitarist/poet, Rafael Lorenzo, in Williamsburg, Virginia. Although he made his living for the next few decades with his talent as a photographer, he never lost his love for recording audio and playing music.

In 1997, he moved away from photography to manage a large music store in South Florida. Galfo began playing multiple instruments and developing his vocal range and style. He also devoted his spare time to studying live sound reinforcement, advanced recording techniques, artist management, and music marketing.

In 2004, he was noticed by Virginia Wagner, a critically acclaimed singer-songwriter from Greenwich Village, New York. He began managing Wagner's music, and was chosen by Anvil Records to be the Executive Producer on her 2007 release, Darkness Visible. Galfo managed the Darkness Visible tour and was subsequently chosen for the position of Producer/Engineer by Anvil.

He is currently producing, recording, mixing, and mastering  Anvil Records artists, indie artists, solo musicians, and bands. He enjoys working with many styles of music, including but not limited to, singer/songwriter, acoustic, classical, jazz, rock, metal, and alternative. Galfo also records and engineers live sound, spoken word, concerts, music festivals, and recitals on location, on university campuses and in places of worship.


"It's a balancing act," says Galfo. "Keeping up my enthusiasm in each area is a great challenge and it's reward gives me the amount of drive that I need to go forward and be productive."﻿

" I love music, and the people that play music."

" Recording music is a lifelong passion that I will never outgrow."

" Fans, Musicians, Producers, and Audio Engineers will pass away, but music is infinite."